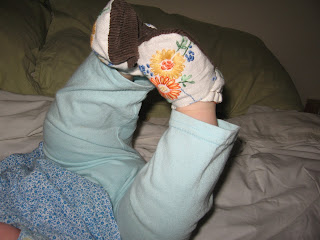 How gorgeous are these? I bought them from Melissa last week and they arrived today and as you can see, are already on Leila's feet. She hasn't yet discovered them so they are thankfully free of slobbery kisses. Thanks Melissa, it will be all I can do to resist buying some more when you list them!
Posted by Victoria at 4:31 PM 1 comment:

Yesterday I managed to cross some to-do's off my ever expanding list and it's so satisfying to do that.


For ages I've been meaning to get across town to Amitie, a fabric shop in Bentleigh that I've heard a lot about. I never used to think much of driving 45 minutes to visit a single shop but now, with the girls, more of a sense of resposibility of not using the car too much and a general laziness, I am less interested in doing so. Nan and Pa came with us though, so it was an outing rather than an errand.
The shop is gorgeous and I had to restrain myself from buying some of absolutely everything. The women there were really warm and friendly too - sometimes more specialised shops can feel a bit exclusive - but that wasn't the case here. 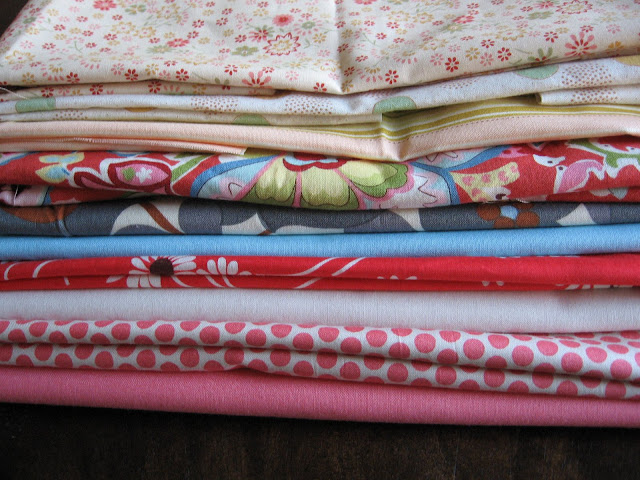 I opened my Etsy shop in June and have only managed to list 3 girls and have a bag full of them almost ready to go. I have been trying to get out to buy trims to finish their dresses without success - illness, various commitments have blocked me at every turn. Some of the materials and trims I bought will mean they can finally be dressed and added to the shop. My motivation in the trip to Amitie was two fold-as last night I also bought one of Allison's gorgeous foldover tops for the babe and I want to find some material to make a skirt to match. I found some gorgeous Amy Butler fabric to make the babe a little aline skirt to match in with the charcoal of the top - can't wait until the top arrives.

So there's material for Leila's little skirt, some extra material for summer twirly skirts for Ella. I've used this House on the Hill's pattern a number of times - it's super easy and comes up really well. Now I need to exhaust my real two girls so I can get working on all the other jobs I need to do. Add to the mix the hankering I have for homemade gnocchi and it's a busy afternoon ahead! 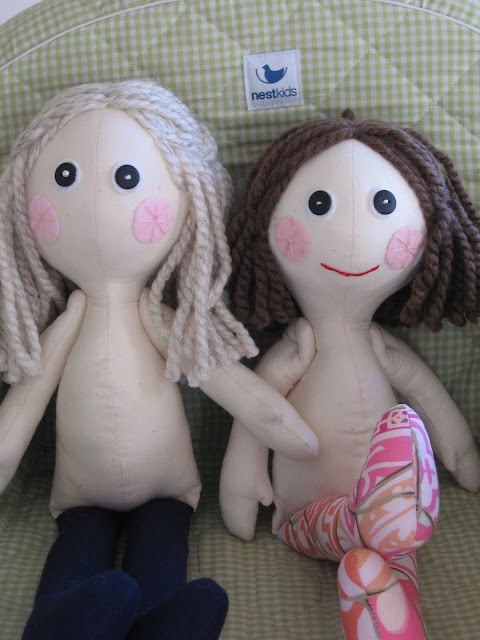 Posted by Victoria at 9:20 AM No comments: 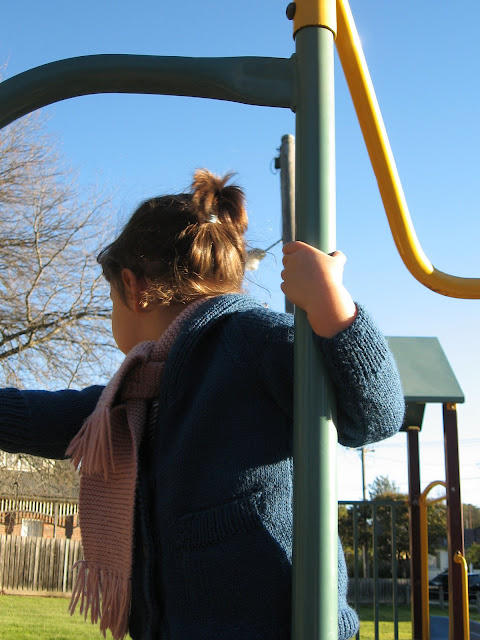 Yesterday it was positively icy and we avoided the outdoors almost altogether. The babe continues with her terrible cold which has now moved to include her chest. She's not completely miserable, but her eyes are watery and red, her nose is completely crusted up and a complete no go zone as far as she's concerned. As you know though, two days inside with small ones is enough so this afternoon we took snacks to the park.

We have two parks nearby, the monkey park and the kinder park. The first is named after the theme of Ella's 2nd birthday party which was held there. The second is opposite her kinder and that's where we went today. There are always other kids there to play with and even if they're not in her class they're in one of the classes and therefore automatically "a friend".

I had all three of us completely rugged up, ready to face the icy breeze, we stepped outside and it was almost balmy, a glorious afternoon. We would have left the house before 3pm if I'd realised.

Posted by Victoria at 6:01 PM No comments: 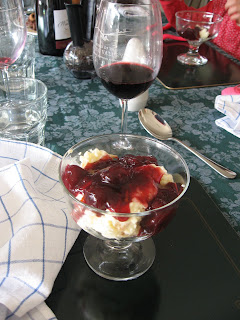 This is my portion of the dessert that I enthusiastically consumed yesterday along with copious glasses of champagne, rose, red wine and Spanish sherry to finish. Sounds like a real Christmas doesn't it, absolute over consumption. I think we started eating around 12 and finished around 4 and didn't eat again that night - apart from corn chips, home made hommous and cleansing ales (at least for dad and pa!).
I was in bed by 8:30 which was of course a signal to the babe to wake and start pestering mama. She's been teething for the last couple of weeks now, is full of a cold and just can't push these pegs through. I know what the "experts" say, that there is no evidence to say that teething causes any real illness, but certainly both my girls were under the weather with most of their teeth and generally just clingy with their mum.
Big sister loved popping the remainder of last year's Christmas crackers and baby sister was content with the gift wrapping. 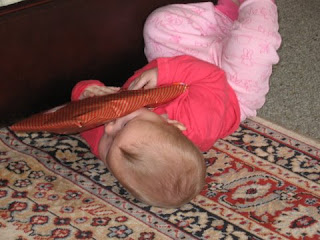 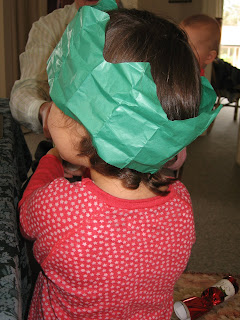 Posted by Victoria at 1:57 PM No comments:

Where the day goes 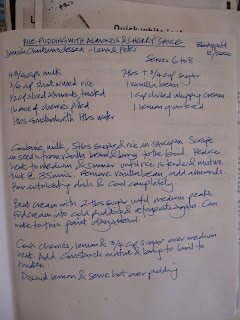 One of the thoughts I have most often these days is "where did the day go". A comment made not just by myself but other friends who are the mum of small children, is that the day went by without us sitting down at all and yet we feel that so little has been achieved.

When I really think about it though, I'm not surprised that by 7pm my weary body is loving the couch. Aside from the general mothering and household duties, add a few extra things into the mix and there's a day.

This weekend we're off to my parents' place, they live in "the hills" to celebrate a Christmas in July. It's something we've talked about forever, but have finally decided to do this year. Coincidentally there have been very low snowfalls this week, not far from where they live. In fact Mt Leonard, which you can see from their back porch, has a covering of snow. The idea is that it will snow for "Christmas" - unlikely, but a great thought.

We'll split the cooking duties when we get there, but I'm preparing the dessert today - Danish Christmas rice pudding with hot cherry sauce - it's delicious. My parents were introduced to it via their dear friends Ebbe and Majken. Coincidentally when we lived in London close friends of ours were also Danish and had it too, so it became our Christmas dessert. I'll be sure to post some of the finished product - your mouth will water when you see the chilled rice pudding topped with hot cherry sauce!

Posted by Victoria at 1:54 PM No comments:

I hope the first of many

Both my girls are full of colds, but somehow, so far, I have managed to avoid it. The bigger one is watching a dvd and is calling out "snacks mum". The smaller one is feeding, balanced on one knee as I write.

Since the arrival of this feeding smaller one six months ago, I've been introduced, somewhat belatedly, to the world of blog sites, and what a world it is. It's so inspiring to see what others are achieving in their daily lives. It's also frustrating, as I still find it so challenging managing the needs of four, let alone the desires of one (that's me). Seeing what you're all doing encourages me to think that perhaps I can get the balance right and manage everything I'd like to do as well as everything I have to do. Now let's just hope I have something interesting to say!

Posted by Victoria at 3:59 PM No comments: