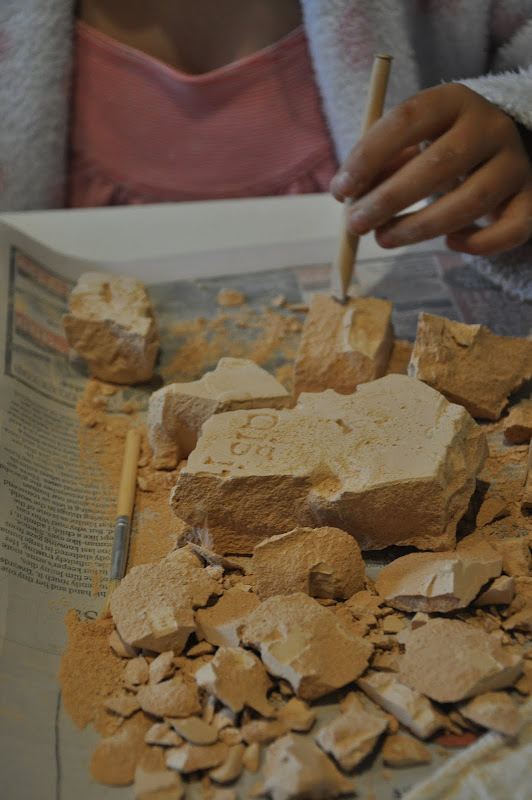 This is the kind of thing we get up to at ours on a sick day. It was quite amusing actually. My parents were over, myself and Ella. All of us were focussed on Ella chipping away at this lump of stuff trying to find and then uncover the two fossils hidden within. You should have seen the itching fingers on all of the adults, just dying to have a turn. 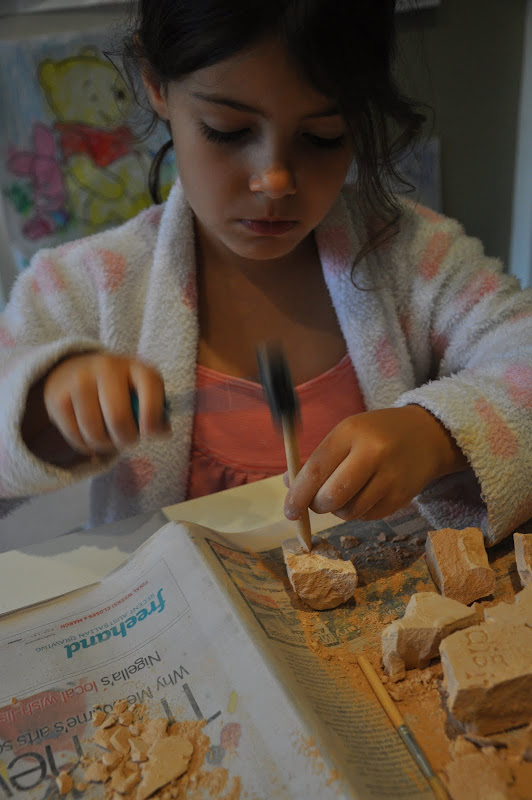 Within, a rock with a fancy name I can't recall and a shark tooth. That was about an hour of fun.
Posted by Victoria at 4:50 PM 2 comments:

I haven't had a lot to brag about in my garden this year. Our summer vegies haven't been terribly successful, tomatoes a disaster, zuchs got fungus on early, eggplants just slow and cucumbers died without giving a good reason.

A few things have done really well and some just give me a lot of pleasure. Is it alright if I share them with you? 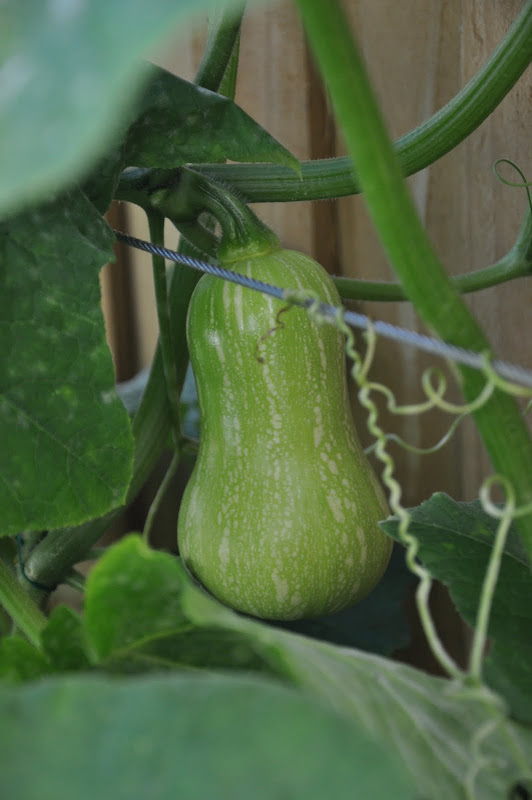 Pumpkins. I haven't grown them before, but my gosh they're going gangbusters. They are taking over our newly finished courtyard. I love watching the boy and girl flowers set, doing a little bit of "assisted parenting" and then seeing which ones take. I think from 3 plants, as it stands today we'll probably end up with about 15 butternuts. Stay tuned in the coming months for LOTS of pumpkin recipes! 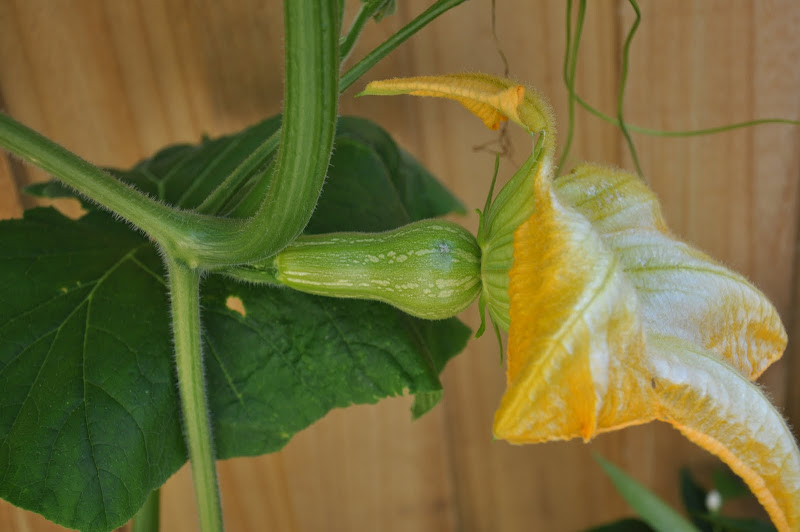 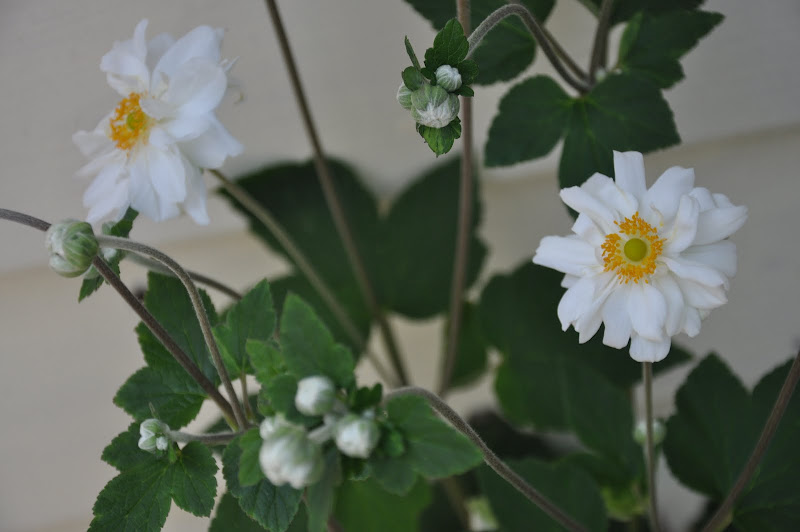 Windflowers, only white ones. Gosh I love these plants. I love the leaves, I love the gorgeous fat buds which unfold like silk flowers and the blooms themselves, so papery and generous. I don't deny my girls much but they know these are flowers that are to stay on the plant and not be delivered to me cut, however lovingly.

These plants are the children and grandchildren of plants from my parents, loving transplanted from their Beechworth home and before that from my childhood home in Carnegie. When we leave this house, a lot of them will come with us and go back to retire to my parents current home. 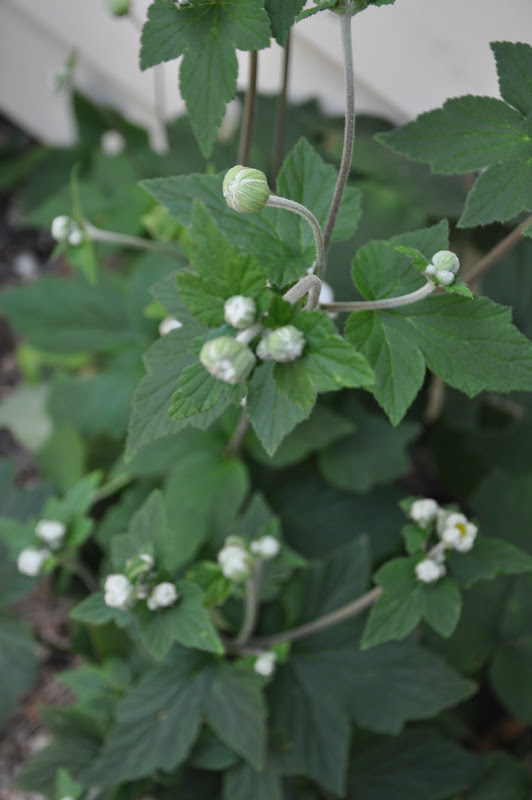 I do like all plants in my garden to serve a purpose. They need to please me with their appearance or their scent, they need to be tasty to eat, or appealing to the native birds. 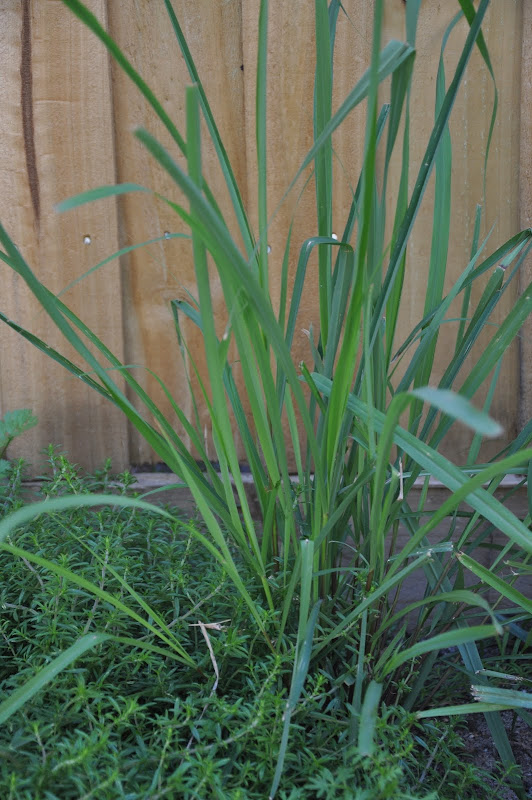 I've never grown lemongrass before, but it loves our garden. They save you can use the young leaves in teas and stirfries, but our cat Eddie loves chewing on them whenever he's in the yard, so I leave them to him. You can see that the little stalks are forming, although I'm not sure how you harvest, if you have to pull up the whole plant or can separate one stalk. 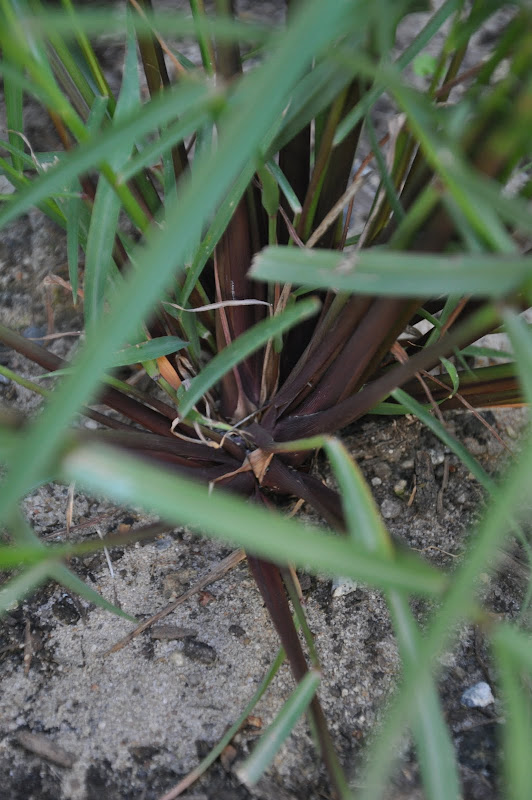 French tarragon is one of my very favourite herbs (along with dill and basil) and it loves its second home in our courtyard. We're having a picnic with friends tomorrow and chicken sandwiches with dill mayonnaise will be the order of the day. 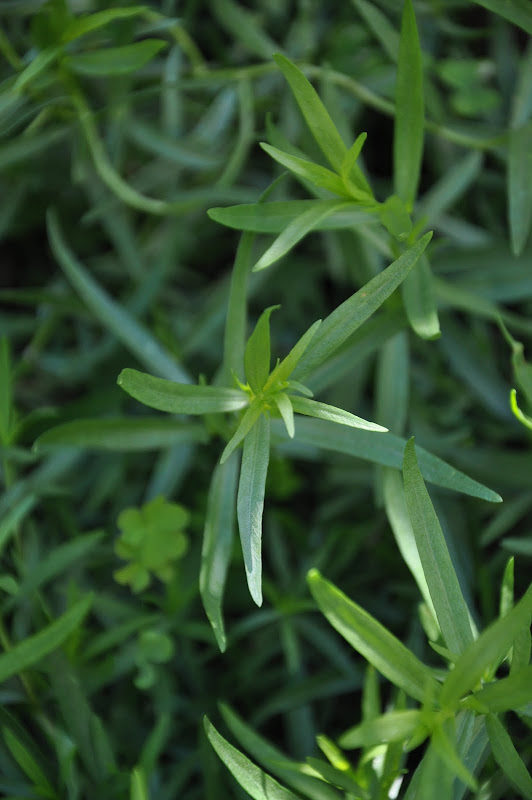 And to the smelly stuff. All herbs (aside from sage whose smell makes me gag when fresh) are deliciously scented, but some are best for their scent, rather than for their flavour. Lemon verbenda in the foreground you can use again in teas, but I just love rubbing the leaves on my skin, so so fresh and delicious. In the background is pineapple sage, which unlike the aforementioned gagmaking sage, smells just like pineapple and is so delicious, also rubbed madly on one's wrists when walking by. 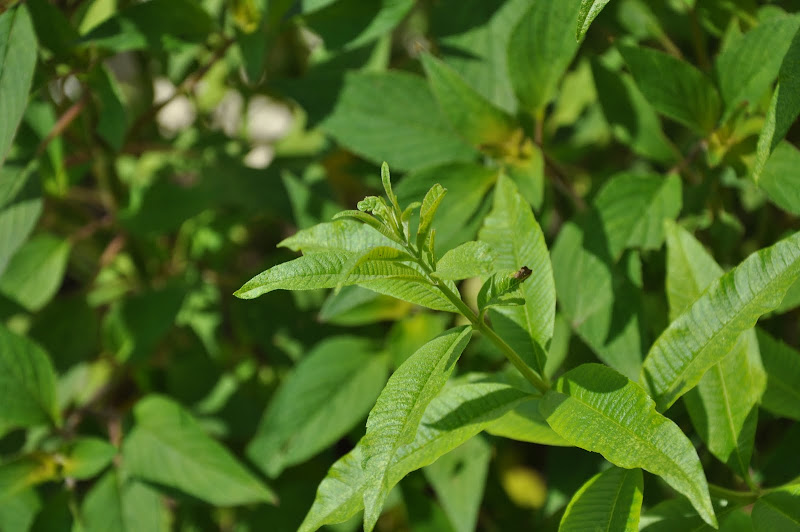 What's doing well in your yard this year? 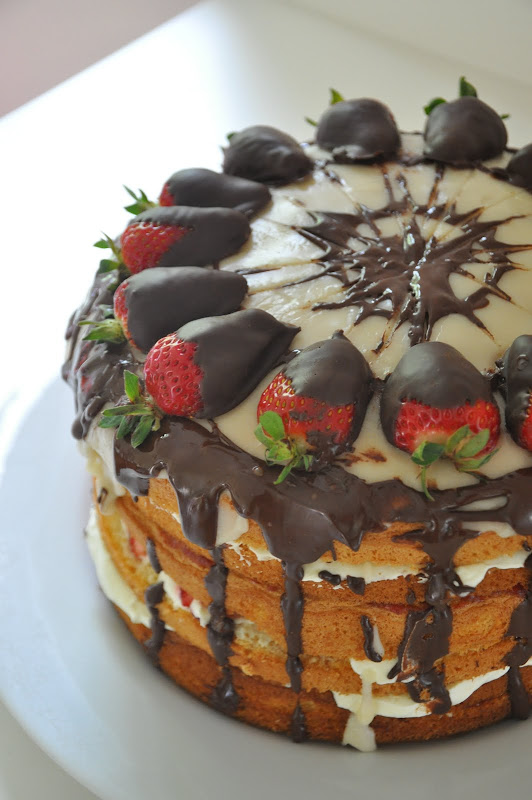 Is there such a thing as too much cake?

We're celebrating my MIL's birthday tonight with all the outlaw family, a total of 14. It's hard to make a cake big enough for that many that is, at least what I call, a celebration cake. To me, a celebration cake screams excess. Leila looked at this cake when finished and said "mum there's too much layers, I can't fit that all in my mouth". She's probably right, I didn't consider the cutting or the serving or the eating when I added layer, upon layer. Who cares though, I'm almost 100% sure that there's a rule which says, you cannot have too much cake. 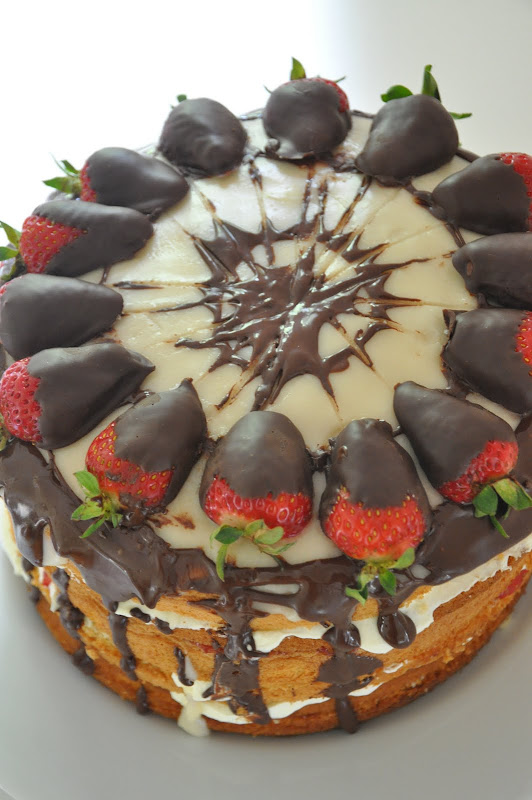 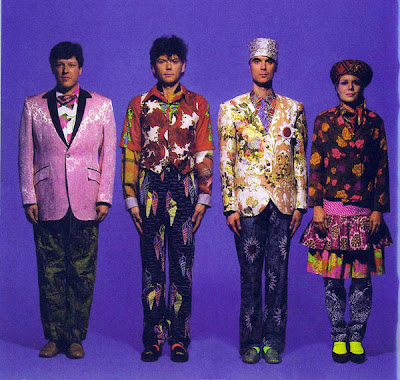 Oh my, we just wasted 137 minutes of our life on a movie we'll never get back. Wall Street Never Sleeps, what can I say, utter, utter shite!
The up/down side, David Byrne did the music for the film and the closing song was my fave Talking Heads track which was redeeming in as much as we had a moment of enjoyment remembering the great track but then getting peeved that it was wasted on such a crap film. It was in the first movie but still. Don't waste your time, life's too short!
Posted by Victoria at 10:59 PM 1 comment: 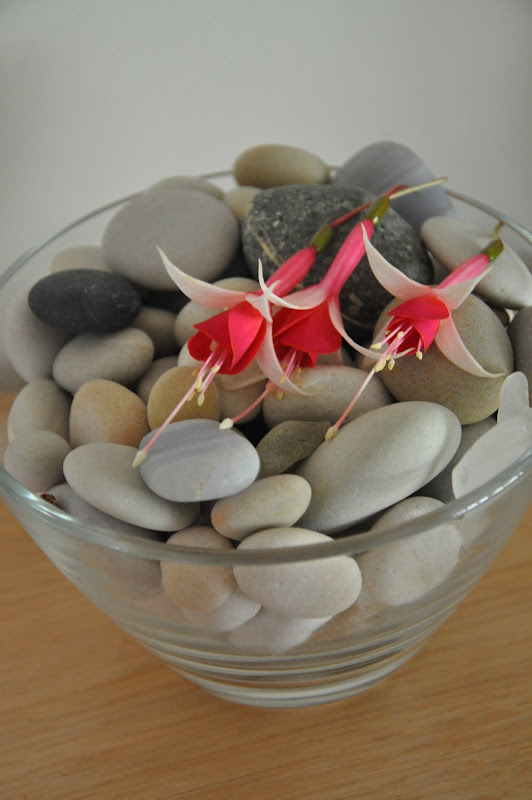 When I was younger my mum collected fuschias. She would nip out little cuttings whenever we were out walking and tenderly nurture them to full grown plants.

Our next door neighbour has a fuschia outside her front door which she is only too happy to share. We now "borrow" little tutus of our own to enjoy, although their lives are somewhat less long lived than those of years ago. There is a little magic everywhere is only you're open to it. I know this sounds cheesey, but I've got my rose coloured glasses on right now, and the view is just lovely.
Posted by Victoria at 2:53 PM 3 comments: 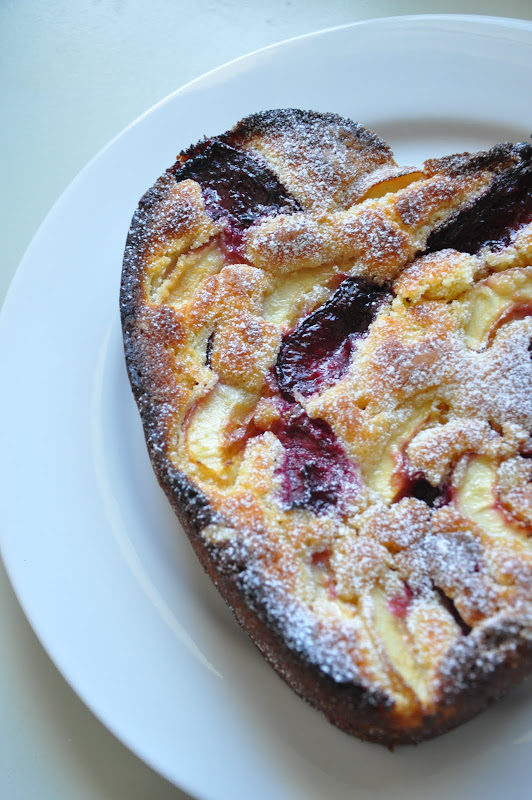 I feel very at ease this year. I know we're only a month in, but considering how bad I was feeling, I'm amazed at myself.
At the end of last year I was beyond desperate with how things had evolved with Leila, kinder and my reaction to it. I can look back on it now and see just how on the edge I actually was. Aside from mild PND following Leila's birth, I can't think of any situation I've been in where I've felt more stressed.

I felt useless as a parent and judged every decision I made with negativity. I couldn't see a way forward. It was tied up with Leila's unhappiness at kinder, her separation anxiety and anxiety in general and I just had nothing left.

I felt I had to do something and in the end sought professional help and starting seeing a psychologist specialising in children. I went along to that first session in December thinking that she was going to give me tools, a written list preferably, telling me what to do to make life better for Leila and in turn us.

I don't know how many of you have ever been to see a therapist of some sort, but I was mildly amused to find it's just like the movies. The room has two comfy chairs, a clock on the table between us and the psych says "So, ....." and then waits for you to speak. I think they must spend a lot of time practising their staring down because I tried not to speak on occasion and yet she had much more will power than me, so you blab on to fill the gaps.

There have been no revelations, there has been very little feedback at all on her part and actually no proactive advice and yet somehow, I feel a changed person. It's very very strange. I am guessing that the act alone of simply talking to a stranger and venting in a way somehow is very cathartic. After the first session I wept that evening and Geoff kept asking "What did she say?" wondering what had upset me so. There was in fact nothing, it was just the release of it all.

I've tried to explain to friends how I feel different, because I really really do and think it's noticeable. I think when you get to the very depth of misery you realise that you can't go any lower, that you have to do something about it, you simply have to. Somehow, and I can't explain why because it wasn't conscious, but somehow I decided to simply not be upset anymore, to be happy. I stopped fighting against Leila and started being there for her in a very basic and honest way. It seems so simple now, but she's really responded, is more confident, is happier and I certainly am. Her reactions fed of mine so much, we fed off each other's miseries and it was awful. Now we've turned the corner and we're both feeding off each other's happiness and it's infectious. It was actually never really about her and more about me.

I'm a very self sufficient person and although I've had difficult times in my life, I've always had the attitude that I can work it out for myself. I'm not a therapy convert, I'm not addicted and for now have no need to go back. But I won't suffer through a situation again, not when the simple act of talking to a stranger, albeit for an hourly rate, can turn your life around.
Posted by Victoria at 4:49 PM 14 comments: