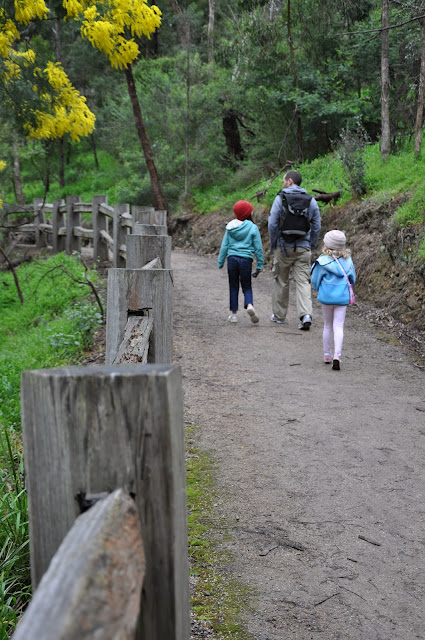 Mullum Mullum or Yarran Dheran, depending on which way you look at it.  Our local area has some gorgeous walks and I want us to make a concerted effort to make more of them.  I just finished the book WILD by Cheryl Strayed.  My oh my, talk about inspiration.  Of course my reality is, as I've just mentioned, Mullum Mullum, but it reminded me of aspirations born many years ago. 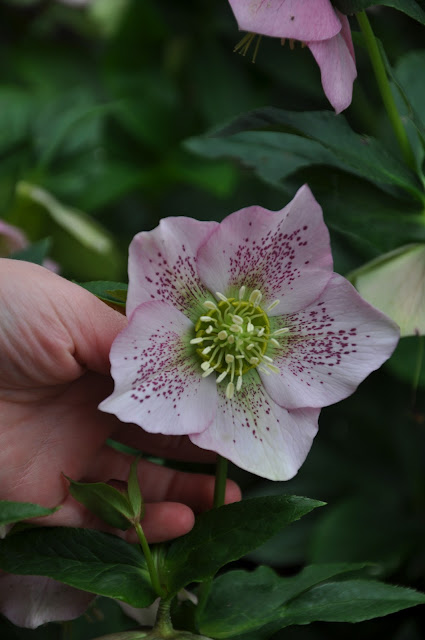 In 1984 I was travelling on my own through the US and Canada, after having lived in Canada during 1991/92.  I was with family in New Hampshire and hiked from the base to the top of Mt Washington with a cousin of mine.  It was an incredible walk, going through many different landscapes, ending with a challenging climb over scree for the last section of the climb, 1917m high at the summit.  We stayed here the night before and met plenty of the type of characters mentioned in the book, although I guess the thru hikers were way above us staying in huts on the trail.  It was here that I first heard of the AMT and wondered if there would ever be a time in my life when I could achieve such a goal. 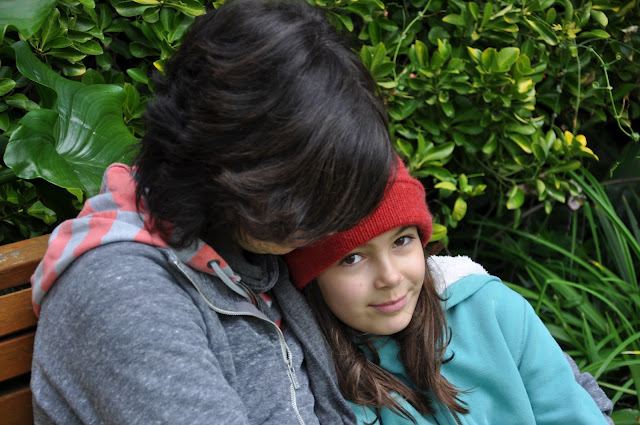 I'm not a marathon runner, but I feel I could well be a marathon walker.  I can manage endurance without fear, but speed is not my thing.  Cheryl wrote of her experience on the PCT and it made my skin tingle with excitement at the thought of it. 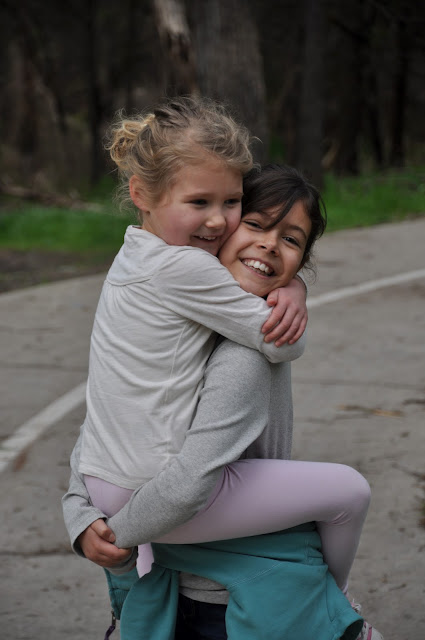 I hiked a lot when I was younger, sometimes reluctantly, but a Landscape Architect boyfriend, skier, hiker and general outdoor lunatic, would drag me along and I'm glad he did.  I'm keen to have the girls walk more with us, they're young and can become stronger, so there's no reason why not.  I want us to do something once a month, something of substance and if I commit to it here it's motivation to follow through. 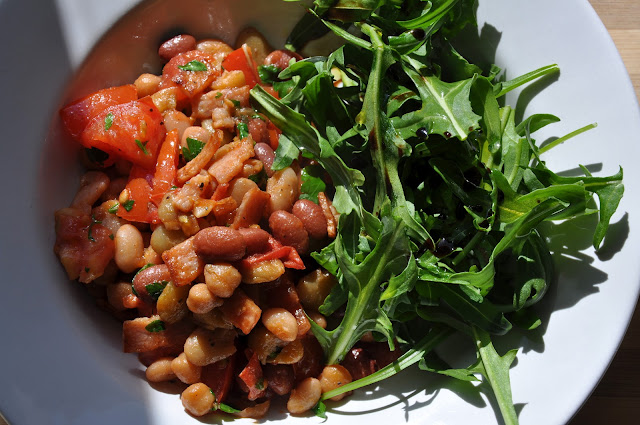 Cut two short cut rashers bacon, add to a pain with a generous glug of olive oil.  Fry until browned then add one clove of finely chopped garlic.

Drain and wash one small can of four mix beans (around 280g), or indeed any other bean you like, add to the bacon and garlic mix.

Once beans appear warmed through, about 2 mins, add one chopped tomato and a pinch of cumin and continue until tomato just starts to collapse.  Salt, pepper, chopped parsley to taste and a little more olive to loosen and make a sauce.

Serve with dressed rocket.
Posted by Victoria at 1:21 PM 1 comment: 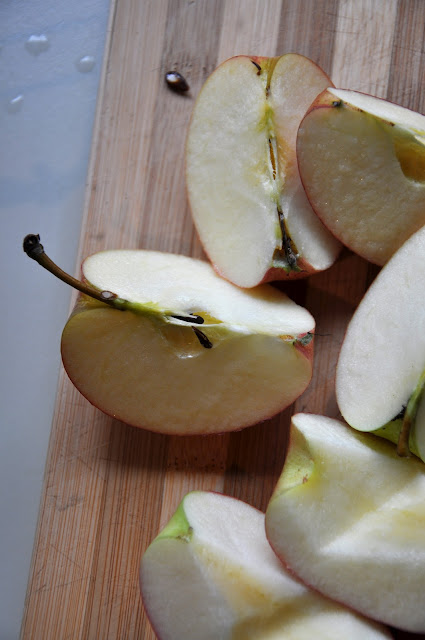 At this time of year a visit to our monthly Farmer's market always includes apples and these eggs.

Posted by Victoria at 5:13 PM No comments: 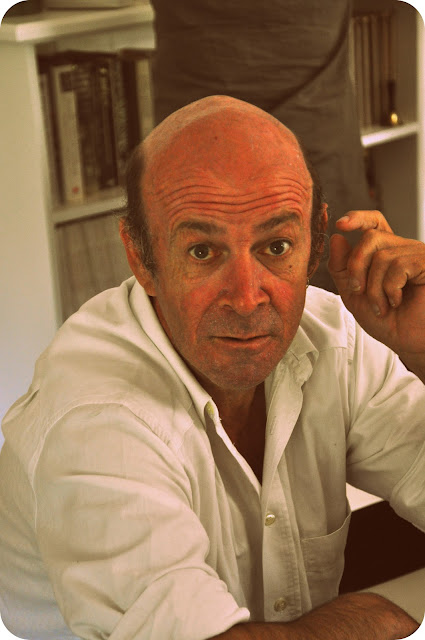 When someone is with you, when you can call them whenever you like and catch up for a meal, you measure time in one way.  Once someone has left you and life continues without them, I've found time is measured very differently.

I didn't know you could love someone more fiercely once you'd lost them, that time, distance, absence alter those emotions not one bit.  Pain can be as fresh one year later as it was on that day.  It's a real thing, loss, it feels so substantial at times that the weight of it can steal your breath.

Geoff gave me a card this morning, trying to find a way to recognise the day.  He wrote I still think of him, he was a good man and I know your loss is profound.  He's so right, he was a good man, he really was, and so sorely missed every day. 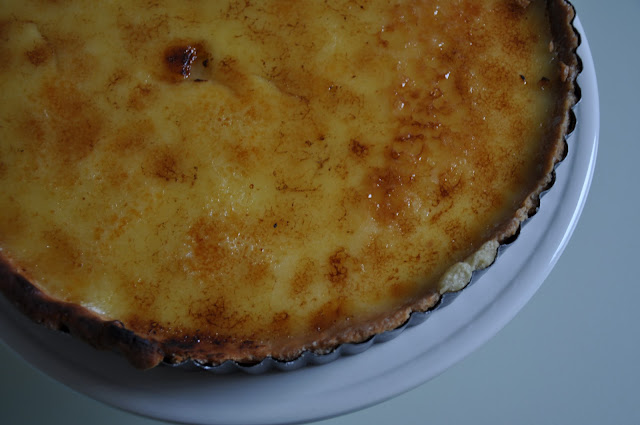 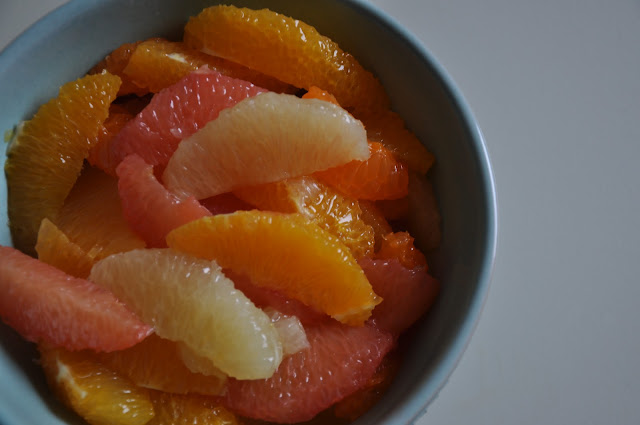 We were to be away on our annual outlaws offsite this weekend.  Last minute one of my nephews was scheduled to have a football injury (broken nose) re-broken and set yesterday - all well there.  Then in the afternoon my dear FIL realised he had a detached retina.  Bluriness followed by loss of sight.

About 19 years ago, just before I met Geoff,  my FIL lost the sight in his "bad eye" after complications following an operation to repair ..... a detached retina.  Understandably we're all very anxious.  Ian has come through the operation as well as can be expected, with a different specialist surgeon I might add, and is home.  There is now a two week wait where he will be completely in the dark until his eye is tested to see if the operation has been successful.

The remainder of the family, those not out of action, will meet and share the meal we all pitched in to prepare for tonight, but here in Melbourne.  From our end, a homemade lemon tart with a Grand Marnier soused citrus salad.
Posted by Victoria at 4:35 PM 2 comments: 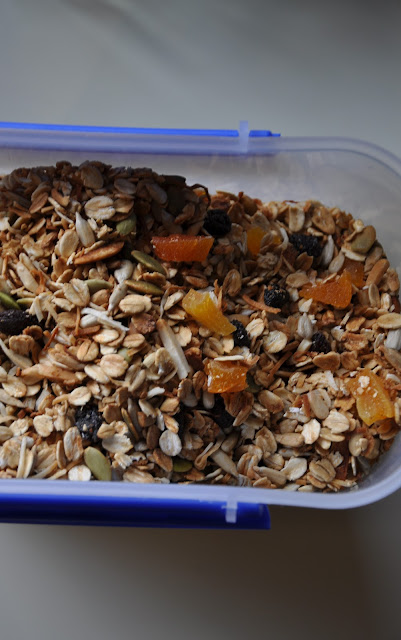 Homemade breakfasts.
Posted by Victoria at 4:27 PM No comments: 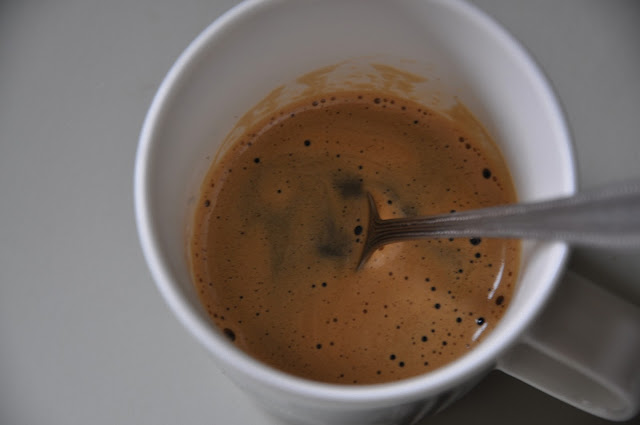 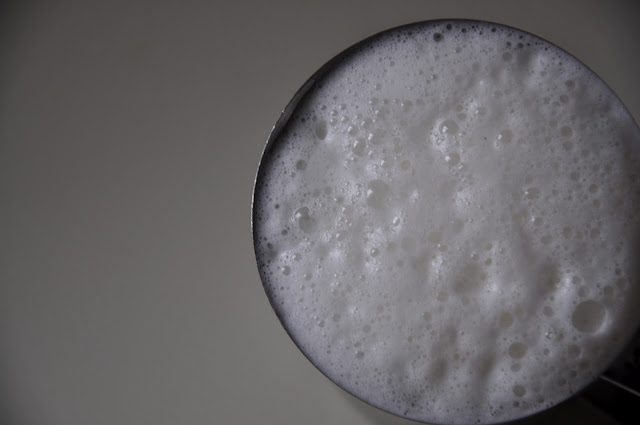 I have found that sometimes you only realise the weight of what you've been carrying once you take a moment, set it down, and see what remains. 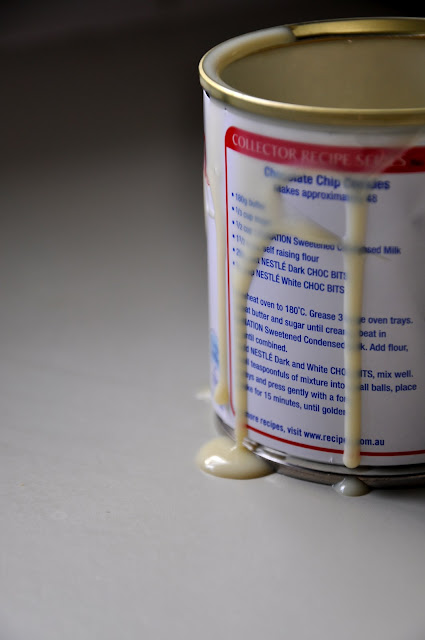 There are a few edible ingredients of which I'm a little wary.  When I was running through them in my head, I realised a few have very similar consistencies - cream of anything tinned soups, custard in a carton, condensed milk....  I'm sure I have probably consumed condensed milk in more things than I'm readily aware of, but I don't believe I have ever added it to anything before.

When I opened the can and it started to ooze out onto my fingers I did squeal a little and the smell was familiar.  It's not the smell of one of my favourite things, quite a sicky smell if you ask me.

My mum has always baked her own bread and I grew up with homemade cakes and biscuits of all kinds, but not slice.  I think of slice as an Australian thing.  That may not be accurate, but for me, that's how I think of them.  My MIL Helen has a very broad slice repertoire, a slice for every occasion even.  Perhaps for that reason it has never occurred to me to make a slice because Helen makes such good ones.

Today I decided to make an Australian classic - the lemon slice.  I did panic a little when I called said MIL from the supermarket and she wasn't home.  There were choices - Marie or Granita biscuits?  I faced the shelf to sweetened reduced milk or regular condensed.  With MIL not answering I went with this recipe. 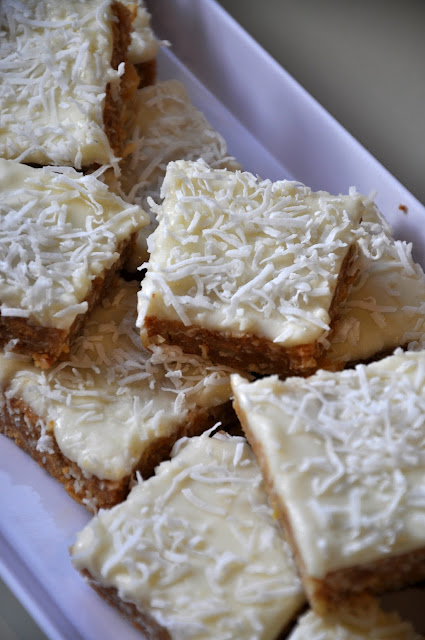 These taste good, but they're not Helen's.  I went with Granitas and condensed milk, but they're very different - that's the problem when you're so sold on someone's version of something, nothing matches up.  My girls LOVE my bolognaise sauce, but on the couple of occasions my mum's made it she's had feedback "It's nice, but not as good as mum's".  I asked the girls "Who do you think taught me to make spaghetti sauce?"  but still, it's never the same.

I need to get Helen's recipes and her little tricks for her fridge lemon slice (as above), her baked lemon slice, her chocolate slice, her apricot and coconut slice, there's a sour cream and apple slice that makes an occasional appearance, and that's just for starters. 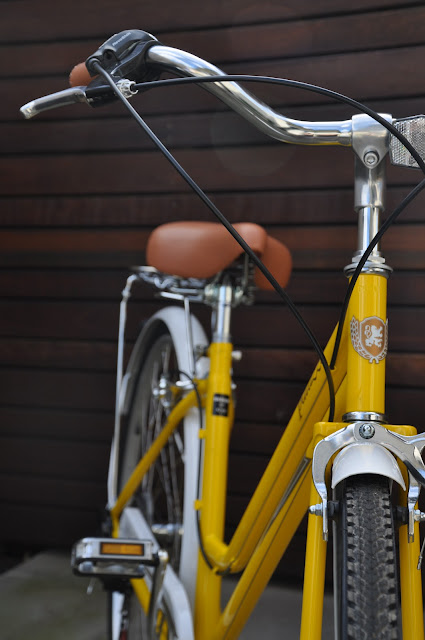 My new toy.  It's a little old fashioned, which I hear is in now, and definitely not the fastest on the block.  It's upright, meaning those with dodgey backs can sit comfortably.  All it's lacking is the wicker basket at the front filled with champagne, a baguette and a bunch of flowers, and that's coming.
Posted by Victoria at 4:27 PM 2 comments: 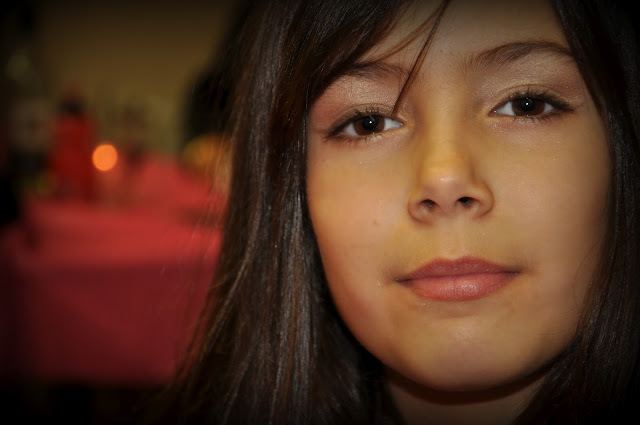 My youngest niece turned 18 and had her party last night.  Ella and Leila both had a little make up on and danced the night away, shaming us utterly with our old foge sitting down antics.  Leila was cutting moves like we couldn't believe, completely uninhibited declaring it "the best night of my life". 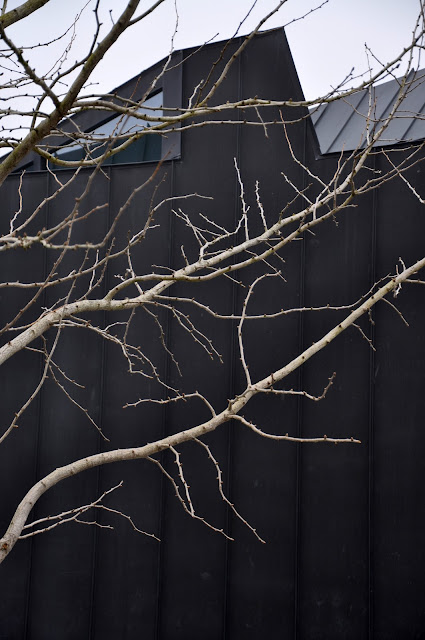 A frosty Melbourne morning.  The fog surrounded us as we turned off the freeway.  Leila and I both agreed that fog is romantic, enveloped in it, unable to see anyone else but each other.

A lovely morning spent meeting a dear friend's new babe, sharing a coffee with them and her parents who have travelled from so far away to share in these early months.  I googled before we left home, "Ahoj" Leila and I offered in welcome. 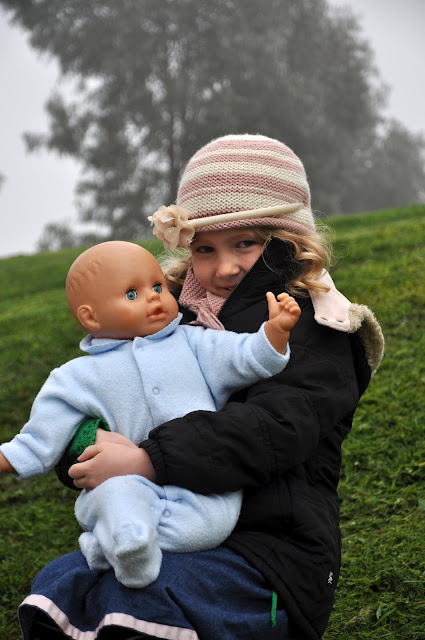